Between 2012 and 2014, the NYCLU sent FOIL requests about automatic license plate readers to the Division of Criminal Justice Services, the NYPD and more than 70 local government entities around New York State, as part of a nationwide effort coordinated by the ACLU to learn more about the use of these devices.

What are automatic license plate readers? 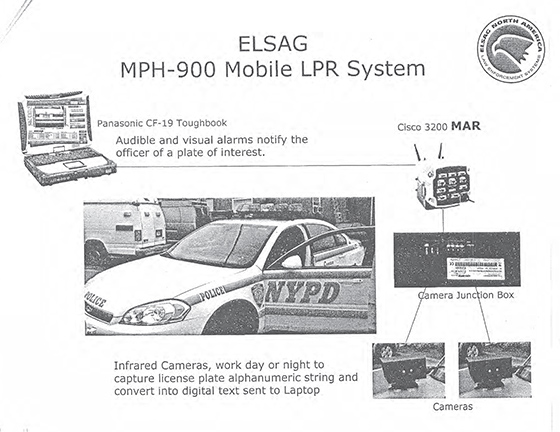 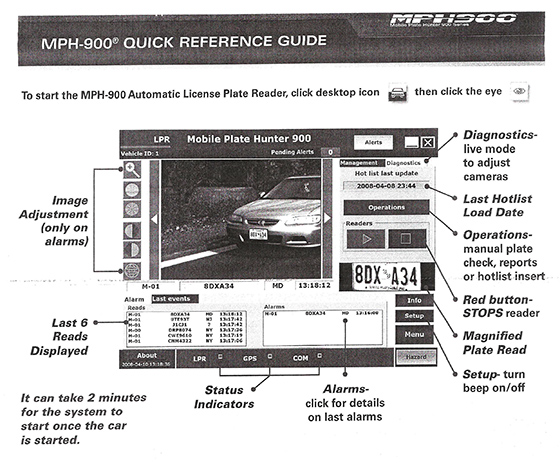 The crux of the problem is that automatic license plate readers record every license plate scanned, regardless of whether the license plate matches a plate on the “hot list.”4 And, as the New York State Division of Criminal Justice Services puts it, the technology has reached the point that “the number of license plates that can be read is limited only by the number of vehicles passing the cameras.”5 That's a lot of information to collect about innocent people. As an example, the Rhinebeck Police Department reported reading 164,043 plates between April and June of 2011, only eight of which were license plates of interest – a 99.99 percent failure rate.6 The privacy implications of the collection of innocent people's location data are serious. The International Association of Chiefs of Police has recognized this, warning that “mobile LPR units could read and collect the license plate numbers of vehicles parked at addiction counseling meetings, doctors' offices, health clinics, or even staging areas for political protests,”7 and therefore can have a “chilling effect on social and political activities.”8 Moreover, without appropriate privacy protections in place, local governments using license plate readers can amass a database of the comings and goings of innocent people over as long of a period of time as they have capacity for storage – and even share the information with other entitles. In this way, license plate readers can create building blocks of a massive government database about New Yorkers, including their political and religious beliefs, daily habits and who they associate with. Just one example illustrates this point. In response to the NYCLU's FOIL request, the City of Beacon Police Department turned over records of its license plate reads from its license plate reader. For our analysis, we reviewed just one week's worth of license plate reads for one car. The license plate reader captured the car's location 24 times in one week, and we were able to use Googlemaps to illustrate the times this car was on Beacon's Main Street. Even this small piece of information paints a detailed portrait of the car owner's comings and goings, including the nights that the driver parked the car on Main Street and likely spent the night nearby. This one example shows the potential to collect embarrassing information, even though the driver did nothing wrong as far as we can tell – the license plate did not trigger any alerts from the system. 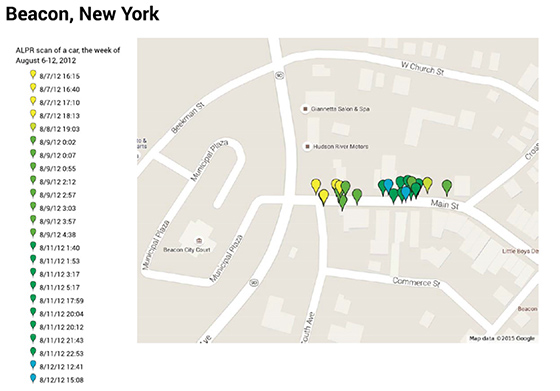 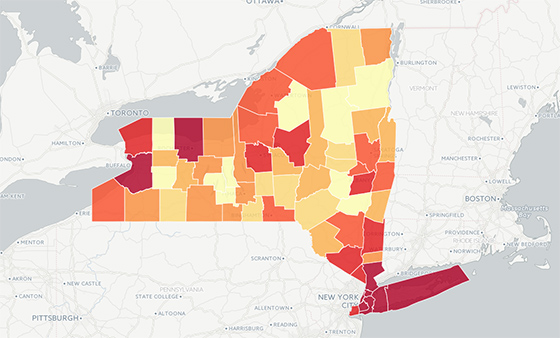 Source: New York State Division of Criminal Justice Services (DCJS) FOIL Production (Aug. 27, 2013). *This map is limited to Plate Readers that are funded through DCJS. Municipalities may have more units through other funding streams. This map also excludes any Plate Reader owned by the NYPD, the State Police, and the NYS DMV.

Even some of New York's smallest municipalities have these devices, including Oxford Village in Chenango County (with a population of 1,450 on 1.78 square miles), Rhinebeck Village (population of 2,657 on 1.54 square miles) and Gowanda Village (population 810 on 0.56 square acres).10 As of November 2014, the NYPD operated nearly 500 license plate readers within its Domain Awareness System, a centralized network of security cameras, license plate readers, and chemical and radiological detectors.11 The NYPD would not confirm whether they were operating additional license plate readers outside the Domain Awareness System.

Who has access to data captured by automatic license plate readers?

Local governments often have access to data outside of those captured by their own automatic license plate readers. Various federal, state and local law enforcement agencies operating in Westchester County, for example, have joined together to establish the Westchester Intelligence Center and share data amongst themselves.12 Local governments in the Albany area have likewise signed an agreement to create the Albany Crime Analysis Center.13 Some local governments also appear to be contracting with private businesses that have massive databases of people's driving history. The responses from the town of New Castle and Yonkers included materials from Vigilant Solutions (formerly known as Vigilant Video)14 – a private company that sells access to its nationwide database of license plate data that it has collected from private and law enforcement automatic license plate readers. The Vigilant Solutions database contains 2.2 billion records of people's whereabouts, and is growing at a rate of around 80 million data points per month. In February 2015, New York City held a contract hearing over a $442,500 proposal that would allow the NYPD to dip into the Vigilant Solutions database.

Update (January 2016): The NYCLU obtained the final contract between the NYPD and Vigilant Solutions, including the scope-of-work proposal. The proposal gives a flavor of the expanded surveillance powers that the Vigilant database gives to the NYPD. With access to the Vigilant database the NYPD can monitor the locations of people around the country, including in apartment complexes, retail areas and business office complexes where NYPD-owned license plate readers may not otherwise be collecting data. The Vigilant database also has the capacity to track a car's location historically or in real time, to conduct a virtual “stakeout” of a location and to identify which cars are commonly seen in close proximity to one another. All of these features magnify the privacy concerns raised by automatic license plate readers.

What policies do local governments have in place for the use of automatic license plate readers?

Because of the lack of any statewide rules, the policies and procedures in place in each locality vary greatly. Moreover, the responses to our FOIL requests showed that many localities in New York State are not adopting the policies necessary to safeguard the collection, use, sharing and retention of location information. Take Westchester County, for example, which had 33 license plate readers funded by the Division of Criminal Justice Services as of 2014 – the highest of any county outside the New York City area.15 The Westchester County Department of Public Safety itself had five license plate readers as of September 2012, but it had no written policy regarding the use of license plate readers, or regarding the storage, accessing or sharing of data obtained by the readers.16 The Department was planning to store the location data it had collected for one year, even though in a one-month period in 2012 the plate readers did not alert 99.9 percent of the time.17 Within the county, Yonkers had six mobile license plate readers and one stationary license plate reader as of the end of December 2012, and also had no written policy on their use.18 Yonkers admitted that it was indefinitely keeping all data that it had collected through the license plate readers.19 Robust privacy protections minimize the chilling effect of new technology and improve the trust between the community and law enforcement. Local governments should be adopting policies that address the public's privacy concerns before acquiring and using automatic license plate readers.

For a look at the use of automatic license plate readers across the country, see the ACLU report You are Being Tracked: How License Plate Readers Are Being Used to Record Americans' Movements.

Comments for White House Office of Science and Technology Policy ...

This Software Could be Spying on NYC Students

Testimony on Vaccine Hesitancy and Equity in NYC