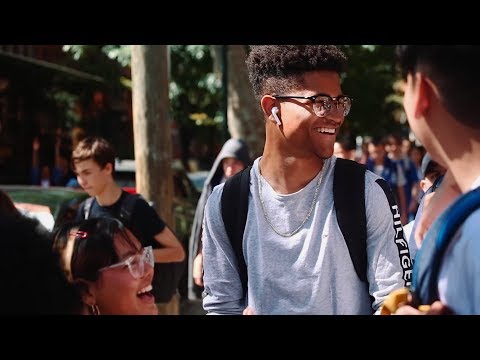 Obrian was devastated when he found out he didn’t score high enough on the Specialized High School Admissions Test (SHSAT) to attend Brooklyn Technical High School, one of New York City’s most selective high schools. Unlike many of the students who gain admission to the city’s specialized high schools, his family didn’t have the resources to spend thousands of dollars on test prep.

His score on the SHSAT put him just below the cutoff mark for Brooklyn Technical High School. But because of the Discovery Program – which allows students from low-income communities who score just below the standardized test cutoff to earn admission to the specialized high schools – Obrian was able to attend a summer program and then start at Brooklyn Tech his freshman year.

Now, he’s thriving. He has a sky-high GPA and he helped his school win the city championship in track and field.

It’s clear Obrian is exactly the kind of student who excels when given the opportunity to attend a specialized high school.

Now he wants more students to have the same opportunities he has. He works with the youth-led integration advocacy group, IntegrateNYC, and he’s part of an effort to protect the city’s recent, modest step toward tackling segregation in New York City schools.

Last summer, Mayor Bill de Blasio announced an expansion of the program in which the city mandates that each of the specialized high schools set aside 13 percent of seats for this upcoming school year and 20 percent starting the following year for students entering through Discovery.

New York’s specialized high schools are stronger because of people like Obrian.

The expansion represents a small improvement and much more will be needed to make the city’s schools, which are some of the most segregated in the country, more diverse.

But the city’s new policy, which has only been in place for one admissions cycle, is already under attack. In December, the Pacific Legal Foundation (PLF), a conservative California legal organization with a history of challenging school integration policies and practices around the country, filed a lawsuit challenging de Blasio’s policy.

Obrian is part of a group of students and organizations that want to see this expansion continue. In May, the NYCLU, ACLU, NAACP LDF, and LatinoJustice PRLDEF filed a motion that asks a judge to let us intervene in this case to help the city defend the expansion to the Discovery Program.

The number of Black and Latinx students who attend the city’s specialized schools has been abysmal for years, and it’s getting worse.

Just 190 of the 4,800 students offered admission so far to the city’s eight specialized schools for enrollment this fall are Black. That’s down from 207 admitted last year out of more than 5,000 offers. The number of Latinx students invited to attend the eight specialized schools is down too, from 320 to 316 students. These numbers don’t include the students offered admission through Discovery.

New York’s specialized high schools are stronger because of people like Obrian. Many more students like him should get the opportunity to attend them.

You can learn more about Obrian’s story in the video above.