A small group of protesters were standing on a West Village sidewalk on Saturday night when, as one bystander explained, they were subject to an “unexpected attack” from the NYPD.

Dozens of police swarmed the protesters, violently arresting them – and pushing into diners nearby – in an unprovoked escalation that has become commonplace.

Police have historically played a central role in the violent suppression of dissent, particularly in response to movements for racial justice. This summer, law enforcement continued this legacy of state-sanctioned violence against dissenters in our streets.

As an organizer who’s spent the last five months on the ground at protests documenting police activity, I have seen firsthand how police officers use violence to intimidate, brutalize, and terrorize people demanding justice. 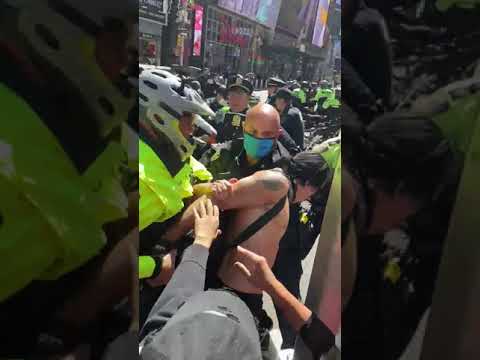 On Saturday, September 19th, protesters gathered in Times Square in response to the recent news of forced hysterectomies being performed on people detained in immigration detention centers.

This protest was convened by The People’s March - a group that has been organizing protests since May demanding police accountability and defunding of the NYPD. The police arrived in large numbers before the rally began and were stationed on all sides of the group as organizers spoke to the crowd.

After the rally, bikers – who have played a vital role these past months in using their bicycles to protect protesters from police and traffic - prepared to march.

As bikers and organizers inched off the sidewalk in preparation to lead the march, NYPD officers descended on the crowd from all sides and threatened to arrest anyone who stepped into the street.

Bikers began to retreat to the sidewalk and the police charged the crowd. Officers forced bikers off the curb and tackled them to the ground while throwing their bicycles toward the crowd. A biker clung to a light post as several officers attempted to drag him by the feet. Other officers followed suit, piling onto bikers and organizers, violently arresting protesters, sometimes beating them with batons.

In response to the NYPD’s violent suppression of protest, 20 protesters sat in the street with linked arms – shifting tactics to civil disobedience. The rest of the crowd, trapped behind barricades of police, looked on as the linked-arm protesters were dragged off the street and loaded into a Department of Corrections bus, joining the 20 other arrested protesters.

Following the arrests, the crowd went to 1 Police Plaza to provide jail support – a crucial part of collective movements where people gather to ensure the release of those who have been detained and offer support to people who need it.

At this point, we were no longer protesting. Nonetheless, officers blocked sidewalk access, separated and trapped us using barricades, and assaulted us again. I was grabbed by several officers as the person next to me was pulled by their hair and tackled to the ground. 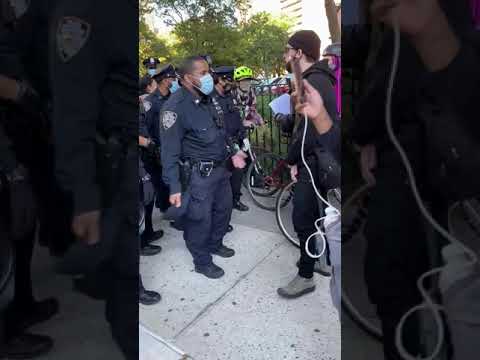 The public eye may no longer be as focused on the response to protests, but the police remain determined to meet protests for racial justice with ferocity.

After almost five months of daily demonstrations, the police are still peddling the false narrative that the dissenters in our streets are instigators of violence. These tactics are most dangerous when law enforcement can act without fear of consequence – assuming they can control the story and justify their actions.

This is a critical way we can protect dissent and strengthen democracy.

Letter to Lawmakers on the Right to Counsel for New Yorkers Facing...

One Way to Fight Against Unfair Landlords

In a Nationwide First, Court Orders Jail to Provide Treatment for...