Communities United for Police Reform joined Council Member Jumaane Williams and other council members at a press conference preceding today’s City Council hearing on the Community Safety Act to outline the need for NYPD reforms. They highlighted the 600 percent increase in the use of stop-and-frisk during the Bloomberg administration, contrasting it with the near constant and unchanged levels of gun violence during the same period, to illustrate the practice’s ineffective use and abuse during Bloomberg’s term as mayor. Participants also pointed to the New Yorkers of diverse backgrounds that are affected by discriminatory policing and profiling, including people of color, immigrants, the LGBT community, Muslims, NYCHA residents, young people, and the homeless, among others. Listing systemic NYPD issues, like quotas, the manipulation of crime statistics, and the mistreatment of protestors and journalists, they declared now was the time for reforms that help end discriminatory policing, improve transparency and provide independent oversight. “Discriminatory policing and the lack of police accountability have continued for far too long and are completely out of control,” said Djibril Toure, a spokesperson for Communities United for Police Reform. “Whether it’s the abusive use of stop-and-frisk, quotas or systemic abuses of power, our city needs the reforms and accountability provided by the Community Safety Act. New Yorkers shouldn’t be policed differently based on the color of their skin, their sexual orientation or any other characteristics that have nothing to do with criminal behavior. The City Council is moving in the right direction to address these protracted issues and our communities support efforts to improve the NYPD so all New Yorkers feel safe.” The Community Safety Act is a package of four bills, sponsored by Council Member Williams, that is intended to help end discriminatory policing and improve police accountability.

“New Yorkers stand in support of the Community Safety Act because it represents the first meaningful reform in a generation of the NYPD's approach to policing historically disenfranchised communities,” said Council Member Williams. “This legislation is a crucial step we must take toward achieving better policing and safer streets for all, a goal we collectively share. By tackling discrimination and instituting true accountability, we will empower 'New York's Finest' to focus their energies on proven strategies that help our city root out crime and violence in every corner.” The hearing follows a rally outside of City Hall on September 27 where approximately a thousand New Yorkers expressed their rejection of discriminatory policing and lax police oversight and support for the reforms offered by the Community Safety Act. It was also announced that all four bills of the Community Safety Act had received sponsorship by a majority of City Council members and endorsements by more than 50 organizations from throughout the city. The City Council will be holding field hearings on stop-and-frisk in Brooklyn and Queens on September 23 and September 24, respectively. “The NYPD are not trying to create safe and healthy communities for people who look like me,” said Brian Pearson, community leader with VOCAL-NY. “They are using policies to harass us, to intimidate us and to drive us into the criminal justice system because they believe that blacks and Latinos are more likely to be criminals.” “I’ve been stopped and frisked numerous times, with no weapon found and I wasn’t arrested,” said Steve Kohut, organizer with the Justice Committee. “Intro 799 would protect me and other law abiding New Yorkers who aren’t aware their rights are being violated by the NYPD.” “These proposals are not ‘anti-police’ or ‘anti-public-safety’ - these are measures directed against unconstitutional, illegal behavior of law enforcement agents, which left unchecked, render all New Yorkers less free,” said Jean Rice, a member of Picture the Homeless. “The Community Safety Act would make history by ensuring that LGBTQ New Yorkers, youth, people with HIV, immigrants, homeless people, and people living in public housing can’t be profiled or targeted by police just because of who they are,” said Andrea Ritchie, co-coordinator of Streetwise and Safe, an organization which works with LGBTQ youth of color who experience homelessness and discriminatory policing. “It will also bring New York City in line with other jurisdictions across the country that make sure that when an officer tells someone to empty their pockets, open up their purse, or drop their pants without any legal justification other than the person’s consent that the consent is real, voluntary, and informed.” “Targeting Black New Yorkers through the use of biased law enforcement practices such as stop and frisk creates two separate and unequal New Yorks based on race,” said ColorOfChange Executive Director Rashad Robinson. “A program that is rooted in racism cannot be reformed, it must be dismantled. The Community Safety Act is a first step toward ending Stop and Frisk and bringing real accountability to the NYPD.” “The Community Safety Act will reform abusive police practices and will bring about a better NYPD - one that is more transparent and accountable to the people of New York,” said New York Civil Liberties Union Executive Director Donna Lieberman. “New York City cannot tolerate the effects NYPD abuses have on innocent lives, on New Yorkers who are targeted for the places they live, their religious beliefs, their gender, and the color of their skin. The City Council must quickly pass these important reforms.” “There has never been a better opportunity to overhaul our city’s police department and ensure New Yorkers are protected against discriminatory policing,” said Center for Constitutional Rights Advocacy Program Manager Nahal Zamani. “The Community Safety Act can help lay the foundation for a police department that is not above the law, one that can protect our city while treating us all with dignity and respect.” “If the NYPD is truly the most sophisticated police force in the nation, then it shouldn't have to rely on discrimination and harassment—some of the oldest, crudest and least effective tricks in the book,” said Brittny Saunders, senior staff attorney for immigrant and civil rights at the Center for Popular Democracy. “Today’s hearing is a chance for New Yorkers to tell their representatives just how much damage current tactics are doing and how the NYPD can do better.” “Every day at The Bronx Defenders, we meet clients and Bronx community members who have been unfairly stopped, illegally searched, and mistreated by the police,” said Robin Steinberg, executive director of The Bronx Defenders. “In the West Bronx, police use force during stops at the highest rate in the city. We are fighting for the Community Safety Act to increase NYPD accountability and make New York City safer for all of us.” 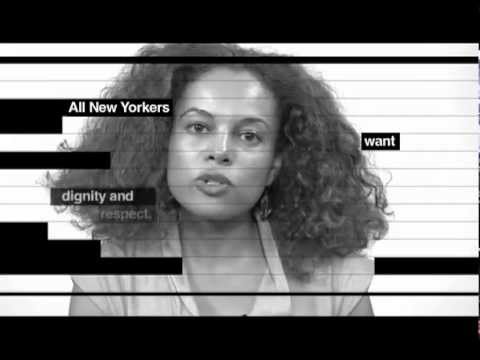 NYCLU Requests Information Regarding Secret Memos to Judges from...

Testimony on Reducing the Responsibilities of the NYPD

NYCLU on RPD Bringing Charges Against One of Seven Officers...