New York’s over-reliance on high-stakes standardized testing harms students, teachers and public schools, with especially harsh consequences for high-need students and the teachers and schools that serve them, according to a letter signed by more than 1,100 New York State professors and released Wednesday by the New York Civil Liberties Union. The experts – from across the state, in disciplines that include education, law, statistics, history, psychology and anthropology – offered professional expertise to help the state generate multiple pathways for accountability. The letter was released during a panel of educators and academics convened by the NYCLU focusing on the problems associated with an over-reliance on high-stakes testing. 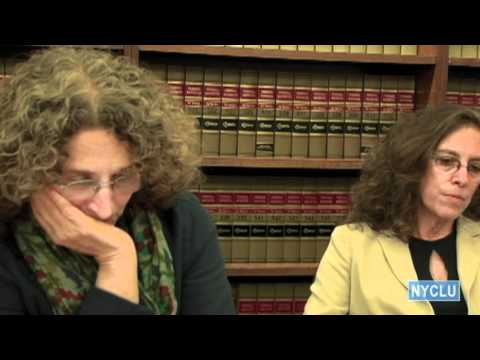 %3Ciframe%20width%3D%22460%22%20height%3D%22315%22%20src%3D%22http%3A%2F%2Fwww.youtube.com%2Fembed%2F5glj7WtPpA8%3Fautoplay%3D1%26version%3D3%26playsinline%3D1%22%20frameborder%3D%220%22%20allowfullscreen%3D%22%22%3E%3C%2Fiframe%3E
Privacy statement. This embed will serve content from youtube.com.
Please note that by playing this clip You Tube and Google will place a long-term cookie on your computer. Please see You Tube’s privacy statement on their website and Google’s privacy statement on theirs to learn more. To view the NYCLU’s privacy statement, click here.
“Academics across New York call on the State Education Department to explore alternative testing strategies,” said Michelle Fine, distinguished professor of psychology, urban education and women’s studies at the Graduate Center of the City University of New York who organized the movement behind the letter. “We are eager to work with state education leaders on assessments that meet federal No Child Left Behind guidelines, but would not promote the disparate impact of testing on high-need youth, undermine teacher professionalism or be a criterion for school closings.” Students of color, English language learners (ELLs) and children with special education needs are unduly punished by high-stakes assessments that are mandated by the federal No Child Left Behind Act, and are increasingly used as instruments to close public schools and denigrate teachers, hurting the city’s most vulnerable youth. The harmful consequences of the heavy emphasis on high-stakes testing include narrowed curricula, as teachers and schools are pressured to prepare students for make-or-break standardized exams – and an academic culture that values test scores over open-ended inquiry and innovative instruction. “Alternative assessments are not a retreat from accountability – to the contrary, they promote greater equity in the public schools and more accurately assess student growth and learning,” Fine said. “There are many rigorous strategies for documenting student strengths and needs that do not risk the adverse impact of high-stakes testing on struggling students, educators, and schools.” The New York City Department of Education has closed more than 140 schools since 2003, largely based on student testing data. In 2012, the DOE publicly released “value-added” teacher-evaluation ratings, based on student test scores, which the DOE originally asserted should never be made public, or used to make employment decisions. Formalizing test-based teacher ratings was integral to New York’s successful application for federal Race to the Top education funding. “The strategy currently employed by New York City Department of Education and the State Education Department is not working for students, teachers or schools,” said Pedro Noguera, Professor of Education and executive director of the Metropolitan Center for Urban Education at New York University. “High-stakes standardized tests are being used to rank and measure students and teachers, and to punish schools, rather than as tools to diagnose learning needs and inform instruction.” “Where is the evidence to support the use of student-testing information to terminate teachers,” asked Douglas Biklen, dean of the School of Education at Syracuse University, critiquing the process of so-called value-added teacher evaluations promoted by the U.S. Department of Education, the State Education Department and the New York City Department of Education. Statewide, teachers whose jobs are threatened by test scores will resist working with high-need, ELL and special-education students, Biklen said. Student teachers will be considered liabilities, and aspiring teachers as well as accomplished veterans will decline posts in struggling, hard-to-serve urban schools, where low test scores could doom a school to closure. “Alternatives to high-stakes testing are lacking in the U.S. because No Child Left Behind strictures bind schools to standardized tests,” said Diane Ravitch, research professor of education at New York University and nonresident senior fellow at the Brookings Institution. “These tests represent a lack of basic trust in teachers and students. The consequences are narrowed curricula, teaching to the test and gaming the system. We say we want bright, creative people to enter and thrive in the teaching profession, but the culture of testing-and-consequences essentially says we don’t trust you to innovate, to create – or to teach.” “Students can succeed when they’re challenged and engaged,” said Ann Cook, executive director of the New York Performance Standards Consortium, a coalition of New York state public high schools, who presented the Consortium’s model of performance-based student assessment as a valid, evidence-based alternative to standardized testing. “Test prep and one-size-fits-all standardized testing do not create an environment that excites young minds.” “New York’s education leaders have the bully pulpit as a beacon of progressive education reform,” said NYCLU Executive Director Donna Lieberman. “Tests have a place in education, but the over-reliance on high-stakes testing as the defining marker for academic progress deprives our children of their right to a good public education. We must not squander the futures of New York’s children or sacrifice quality instruction to meet political agendas. All of our students and their teachers deserve better.”
Related Issues

Comments for Environmental Protection Agency (EPA) on the Strategy...

Parents Get Reported for Neglect After Keeping Kids Home During...

Your Rights When Facing Metal Detectors in Schools