The New York Civil Liberties Union released a report today featuring the stories of New York women who were unable to receive constitutionally protected abortion care because of the state’s outmoded abortion law. Their stories, relayed both by medical providers and by patients to the NYCLU, make the case for reforming New York’s law in order to bring it in-line with the Supreme Court’s Roe v. Wade decision. Strengthening New York’s abortion law is all the more critical given the ascendance of Donald Trump to the presidency and the control of Congress by anti-abortion politicians.

“All women should be able to access abortion care if their health is at risk or their fetus isn’t viable,” said NYCLU Executive Director Donna Lieberman. “New York should be a progressive leader for women now that the Trump regime cannot be counted on to respect a woman and actually threatens to repeal Roe v Wade. But our abortion law has been out of date and shamefully inadequate for decades.”

The Supreme Court’s 1973 Roe v. Wade decision established a woman’s constitutional right to abortion throughout pregnancy when the fetus is not viable or if she needs an abortion to protect her health or her life. But New York’s abortion law – drafted three years earlier in 1970 and left unchanged – criminalizes abortion after 24 weeks unless the woman is dying. New York’s penal law does not allow for an abortion to protect the health of the woman or even if the fetus is not viable.

Because the human body doesn’t follow legal timelines, this outdated law causes severe harm to women. There are health risks that arise after 24-weeks of pregnancy that become exacerbated because of the pregnancy, such as cancers or aneurisms. Likewise there are fetal anomalies that remain hidden until late in pregnancy. Yet hospitals and health providers in New York are reluctant to provide abortion care to women in these circumstances because New York’s penal code criminalizes this care on its face.

“It was shocking and painful to learn I could not end my pregnancy in New York even after it was determined that my baby could not survive,” said Erika Christensen, a woman whose experience is featured in the NYCLU report. “I naively thought New York cared about my health and my rights. It was awful to have to get on a plane in that moment, fly across the country and spend thousands of dollars to get the care I should have had here.”

As a result of the outdated state law, women jeopardize their well-being to travel across the country to another state that will provide them an abortion, which can cause additional health risks and cost as much as $25,000. Other women unable to bear the high costs have no choice but to wait for their health to deteriorate and an abortion is needed to save their lives, or to carry an unviable fetus to term despite the health risks.

“Patients and providers have shared wrenching stories with us of women who faced medical peril, extreme cost and devastating loss,” said NYCLU Policy Counsel Katharine Bodde. “New York law interferes with constitutionally protected medical care and this suffering is needless. It is time for lawmakers to move past politics and fix our state law.” 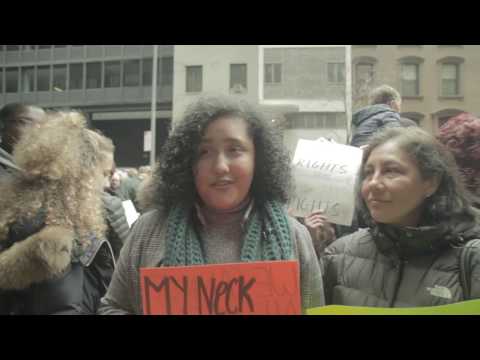 Harrowing stories told in the report include:

State Attorney General Eric Schneiderman issued a formal legal opinion in September of last year clarifying that Roe v. Wade supersedes the restrictions in New York’s outdated abortion law. However, the NYCLU has continued to hear from women who are denied care in such circumstances.

“It’s my job as a doctor to help patients and their families make medical decisions that are hard under any circumstances,” said Dr. Stephen Chasen of New York-Presbyterian Hospital. “New York law does not always permit me to do what is safest for my patients.”