NYPD personnel assigned to New York City's public schools have repeatedly violated students' civil rights through wrongful arrests and the excessive use of force, according to a class action federal lawsuit filed today by the New York Civil Liberties Union, American Civil Liberties Union and the law firm of Dorsey & Whitney LLP. The landmark lawsuit challenges the conduct and behavior of police officers and school safety officers (SSOs) serving in the NYPD's School Safety Division. It was filed on behalf of five middle school and high school students who were physically abused and wrongfully arrested at school by NYPD personnel. The plaintiffs seek system-wide reform in New York City's middle schools and high schools. 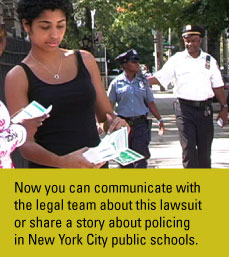 "Aggressive policing is stripping thousands of New York City students of their dignity and disrupting their ability to learn,” said NYCLU Executive Director Donna Lieberman. “We all want safe schools for our children, but the current misguided system promotes neither safety nor learning. Despite mounting evidence of systemic misconduct by police personnel in the schools, the NYPD refuses to even acknowledge any problems with its school policing practices. We are confident that the courts will compel much-needed reform.” Plaintiff D.Y., 13, is an eighth-grade student at Lou Gehrig Middle School in the Bronx. On Oct. 7, 2009, D.Y. was unlawfully arrested by SSOs following a confrontation in front of her school initiated by two adult strangers who had threatened her. An SSO instructed D.Y. to go into the school with the strangers. Frightened, D.Y. told the SSO that she preferred to wait outside for her mother who was coming to pick her up. In response, the SSO grabbed D.Y. by the arm, handcuffed her, forcefully threw her down and pinned her to the ground. D.Y. sat handcuffed at a desk until her mother managed to find her. No charges were filed against her. D.Y. required medical attention as a result of the assault. “I feel unsafe at school,” D.Y. said. “I'm afraid that School Safety Officers could attack me again for no reason. I just want the school year to be over so I can be a normal kid again. I shouldn't have to be scared of school.” The lawsuit maintains that inadequately trained and poorly supervised police personnel engage in aggressive behavior toward students when no criminal activity is taking place and when there is no threat to health and safety. The police confront and arrest students over minor disciplinary infractions such as talking back, being late for class or having a cell phone in school. The lawsuit documents numerous incidents in which students engaged in non-criminal conduct were handcuffed, arrested and physically assaulted by police personnel at school. The aggressive policing in the city's schools contributes to the school to prison pipeline, a disturbing national trend wherein students are funneled out of the public schools and into the juvenile and criminal justice systems. These children tend to be disproportionately black and Latino, and often have learning disabilities or histories of poverty, abuse or neglect. “If you treat children like criminals, they will fulfill those expectations,” said Catherine Y. Kim, staff attorney with the ACLU Racial Justice Program. “Aggressive policing in public schools undermines efforts to create a nurturing and supportive environment for children, and without strict accountability and transparency, too many at-risk youth fall through the cracks and are denied equal educational opportunities.” Since the NYPD took control of public school safety in New York City in 1998, more than 5,000 SSOs, civilian NYPD employees assigned to the schools, and nearly 200 armed police officers have been assigned to the city's public schools. This massive presence makes the NYPD's School Safety Division the nation's fifth largest police force – larger than the police forces in Washington D.C., Detroit, Boston, Baltimore, Dallas, Phoenix, San Francisco, San Diego or Las Vegas. The number of police personnel assigned to patrol New York City public schools has grown by 73 percent since the transfer of school safety to the NYPD, even though school crime was declining prior to the 1998 transfer and even though student enrollment is at its lowest point in more than a decade. SSOs wear NYPD uniforms and possess the authority to stop, frisk, question, search and arrest students. While NYPD police officers must complete a six-month training course before being deployed, SSOs receive only 14 weeks of training before being assigned to schools. School administrators have no supervisory authority over the SSOs who patrol their schools. “When one of our clients was 11 years old, she was handcuffed and perp-walked into a police precinct for doing nothing more than doodling on a desk in erasable ink. Amazingly, no one in the police department or the school seemed to think there was anything wrong with that,” said Joshua Colangelo-Bryan, senior attorney at Dorsey & Whitney and co-counsel on the case. “It's a sad day when you need to resort to a lawsuit to keep an 11-year-old from being arrested for drawing on her desk, but in this case it is clear there is no alternative.” From 2002 to June 2007, the NYPD Internal Affairs Bureau received 2,670 complaints against members of NYPD's School Safety Division – about 500 complaints annually – even though no effective or publicized mechanism exists for lodging complaints against school safety officers. Families that have lodged complaints against SSOs have reported that, in response, the NYPD simply transfers those SSOs to different public schools. Additionally, the Civilian Complaint Review Board, which investigates allegations of police misconduct, has reported that the NYPD receives about 1,200 complaints a year about SSOs. The lawsuit, filed in the U.S. District Court for the Eastern District of New York, seeks the following remedies: Among those who worked on the case include Lieberman, Kim and Colangelo-Bryan as well as Arthur Eisenberg, Adriana PiÃ±Ã³n, Udi Ofer, Johanna Miller, Kathryn Hunt Muse, Naomi Shatz, Deuel Ross, Angela Jones and Daniel Grossman.
Related Issues

NYCLU Statement on Governor Hochul’s State of the State Address

Here’s What Rochester Students Need Instead of Police in Schools