The New York Civil Liberties Union will express its strong opposition today to an anti-immigrant ordinance under consideration by the Town of Oyster Bay in Nassau County, arguing in testimony that the bill criminalizes constitutionally protected speech and unfairly targets day laborers seeking work. “The Town of Oyster Bay is using safety as a smokescreen for intolerance,” said NYCLU Nassau County Chapter Director Tara Keenan-Thomson. “This proposal criminalizes standing while Latino, and infringes on the First Amendment rights of all Oyster Bay residents.” 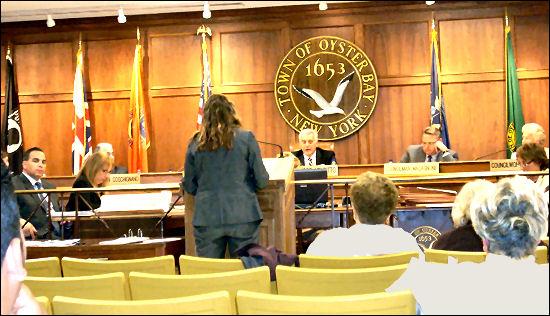 NYCLU Nassau County Chapter Director Tara Keenan-Thomson testifying against the ordinance at the Town of Oyster Bay Board Meeting.

The NYCLU will testify that the proposal to amend Chapter 205 of the Town Code would violate the First Amendment by outlawing basic speech such as “waving arms,” “making hand signals,” “waving signs” and “jumping up and down.” It criminalizes this speech in “all of the areas dedicated to public use for public street purposes” and includes parks, sidewalks, medians and curbs. Though the authors of the bill describe it as intended to protect the “safety and security” of the town's residents, it criminalizes day laborers, who are often Latino, for doing nothing more than trying to support their families. Moreover, lawmakers and police officials have yet to explain why current road safety laws – such as New York State's Vehicle and Traffic Laws – are inadequate to safeguard the Oyster Bay's roadways. “This bill is no innocent public safety measure,” Keenan-Thomson said. “Instead, it is a hostile attempt to drive day laborers from roadsides and, indeed, from Oyster Bay itself.” Keenan-Thomson will testify tonight at 7 p.m. at the Town of Oyster Bay Board Meeting, Town Hall East, 54 Audrey Ave. in Oyster Bay.

To Reduce the Power of Police, We Must Protect Our Privacy

Repression, Surveillance, and Resistance: 20 Years after 9/11

Comments on the NYPD's Draft Policy on Response to First Amendment...