Nearly 1500 supporters of the New York Civil Liberties Union gathered at West Capitol Park in Albany today for an Emergency Day of Action rally. The demonstration, under the banner, “Justice Does Not Compromise,” demanded state legislative action to safeguard vital civil liberties that are under threat from the Trump administration.

The largest statewide gathering in the NYCLU’s history comes after a swell of new members in response to the election of Donald Trump. NYCLU staff and supporters prepared to meet after the rally with more than 200 elected officials and staff.

“President Trump has wasted no time implementing an agenda based on hate, fear and bigotry,” said NYCLU Executive Director Donna Lieberman. “New Yorkers demand that our representatives resist Trump’s destructive agenda. New York must be a safe haven for democracy and our principles of dignity and respect for all. There can be no compromise when it comes to our civil rights.”

The rally and Day of Action focus on five legislative demands:

Poor New Yorkers charged with a crime often rely on court appointed attorneys who have few resources and face massive caseloads. People are held in jail for no reason and plead guilty to charges even when innocent. As the Trump administration promises a “tough on crime” approach that drives mass incarceration, the Justice Equality Act would ensure that the state properly funds and oversees public defense services, fulfilling its constitutional duty to provide counsel and advancing equal justice.

Roe v. Wade established a woman’s right to abortion throughout pregnancy to protect her health and her life, or when the fetus is not viable. But New York’s abortion law, drafted earlier, is still on the books and criminalizes abortion after 24 weeks unless the woman is dying. It has no health exceptions. Now, President Trump wants to overturn Roe v. Wade and leave abortion rights to the states. The Reproductive Health Act would codify the constitutional protections established in Roe v. Wade in New York.

The Trump administration recently rescinded guidance clarifying transgender students’ rights. Now lawmakers can strengthen New York’s protections for students by fixing a loophole in the state Human Rights Law to ensure that it applies to students facing discrimination, and fortify protections for transgender and gender nonconforming people by passing the Gender Identity and Expression Non-Discrimination Act (GENDA). The Trump administration has also dramatically expanded the number of immigrant New Yorkers who could face mass deportation. Police officers have no business doing the work of federal immigration agents, and New York State should not enable the Trump deportation machine.

Police need a warrant before searching people’s photos, files, letters and other physical documents, but state laws do not require the same protections for phones or emails, text messages and other digital documents. The New York State Electronic Communications Privacy Act (NY-ECPA) would require a warrant from a judge before police can snoop through New Yorkers’ digital lives. The state should also take measures to ensure that the government isn’t maintaining sensitive personal information in government databanks.

New York State can push back against the Trump administration’s regressive criminal justice agenda by creating a policing model that serves all communities. The Police Statistics and Transparency Act (Police STAT Act) would require the reporting of police encounters involving violations and misdemeanors that lead to an arrest, summons, ticket or prosecution. And it would disclose when a law enforcement officer's actions may have been a factor in a death, as well as the demographic data on the person who died and where the death happened.

“This is just the beginning of our efforts to stand up for civil liberties and safeguard New York from President Trump’s agenda,” said NYCLU Director of Organizing Campaigns Lauren Frederico. “We will continue to engage, train and mobilize New Yorkers of all backgrounds, and from all corners of the state, to exercise and defend their rights.” 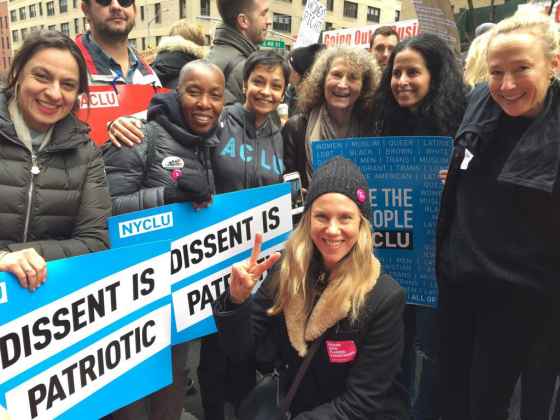