The New York Civil Liberties Union today released an iPhone version of Stop and Frisk Watch – a free smart-phone app that allows bystanders to document NYPD stop-and-frisk encounters and alert community members when a street stop is in progress. “Stop and Frisk Watch empowers New Yorkers to confront abusive, discriminatory policing,” said NYCLU Executive Director Donna Lieberman. “The NYPD’s own data shows that the overwhelming majority of people subjected to stop-and-frisk are black or Latino, and innocent of any wrongdoing. Our smart phone app allows individuals and community groups to document in real time how each unjustified stop further corrodes trust between communities and law enforcement.” 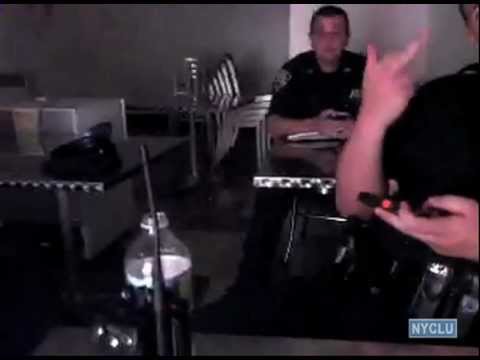 %3Ciframe%20width%3D%22420%22%20height%3D%22315%22%20src%3D%22http%3A%2F%2Fwww.youtube-nocookie.com%2Fembed%2FjDjZq7l-Zs8%3Fautoplay%3D1%26version%3D3%26playsinline%3D1%22%20frameborder%3D%220%22%20allowfullscreen%3D%22%22%20allow%3D%22autoplay%22%3E%3C%2Fiframe%3E
Privacy statement. This embed will serve content from youtube-nocookie.com.
Please note that by playing this clip You Tube and Google will place a long-term cookie on your computer. Please see You Tube’s privacy statement on their website and Google’s privacy statement on theirs to learn more. To view the NYCLU’s privacy statement, click here.
Stop and Frisk Watch, which has been available on Android phones since June and has been downloaded by nearly 20,000 New Yorkers, allows bystanders to fully document stop-and-frisk encounters and alert community members when a street stop is in progress. It has three primary functions: The app includes a “Know Your Rights” section that instructs people about their rights when confronted by police and their right to film police activity in public. Stop and Frisk Watch is intended for use by people witnessing a police encounter, not by individuals who are the subject of a police stop. The NYCLU developed the app with Jason Van Anden, a Brooklyn-based visual artist and software developer who previously developed the Occupy Wall Street app, “I’m Getting Arrested.” “I am fortunate to live in one of the most diverse neighborhoods in New York City,” said Van Anden, a resident of Flatbush. “I have witnessed the negative impact stop-and -frisk has had on some of my neighbors. Racial profiling creates distrust between the community and the police. We need more trust, not less. I hope that this app will help to discourage, and ultimately end, this unfair and abusive policy.” During the first three quarters of 2012, police stopped innocent New Yorkers 392,897 times – the overwhelming majority of whom were black or Latino. In 2011, the NYPD stopped and interrogated people 685,724 times, a more than 600 percent increase in street stops since Mayor Bloomberg’s first year in office when there were only 97,296 stops. Nine out of 10 of people stopped were innocent, meaning they were neither arrested nor ticketed. About 87 percent were black or Latino. An NYCLU analysis showed that black and Latino males between the ages of 14 and 24 accounted for 41.6 percent of stops in 2011, though they make up only 4.7 percent of the city’s population. The number of stops of young black men exceeded the city’s entire population of young black men. Since the NYCLU launched its Android version of the app in June, we’ve received more than 5,000 videos, including 200 videos documenting police incidents. More than 1,000 additional written reports have been submitted by New Yorkers, including documentation of police officers being verbally abusive during street stops, of officers drawing weapons during street stops, and one incident in which an officer used the floodlights of his car to prevent a bystander from recording video of a stop-and-frisk. The NYCLU reviews every video and report it gets, and staff investigate all relevant submissions to the fullest extent possible. “While we’ve yet to see a ‘Rodney King’ moment, Stop and Frisk Watch submissions have confirmed a number of concerns the NYCLU has about stop-and-frisk abuse and has provided New Yorkers with a powerful tool to document police abuse,” Lieberman said. “We’re proud that the app is used every day in New York City and that the attention it has received has encouraged people to document and expose police activity with their smart phones.” To download Stop and Frisk Watch, visit www.nyclu.org/app.
Related Issues