Dignity for All? Discrimination Against Transgender and Gender Nonconforming Students in New York State

In public schools across the state, transgender and gender nonconforming children as young as five face relentless harassment, threats and even violence for trying to access their right to an education. Instead of supporting students, schools are magnifying the problem by imposing discriminatory and even illegal policies.

Dignity For All? Discrimination Against Transgender and Gender Nonconforming Students in New York State is based on the requests for legal assistance the NYCLU has received from real families since the passage of the Dignity Act five years ago – a law that was intended to protect all students from harassment but that public schools struggle to apply to transgender students without state guidance. The report documents the experiences of a 5-year-old who was physically assaulted, of parents trying to raise kids in the shadow of sky-high suicide and depression rates with no support from schools, and students too afraid to use the bathroom, eat lunch or even speak up to complain. It’s time to stop the discrimination and harassment of transgender and gender nonconforming youth in New York schools. All of New York's children have a right to be themselves and get an education, no matter where they go to school.

VIEW THE VIDEO
Meet Locke, one of the students brave enough to share his story. 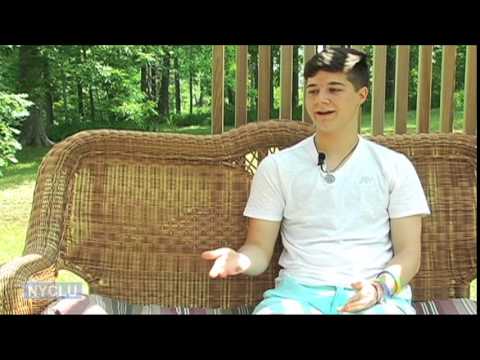 MODEL POLICY
Model Policy for Creating a Safe and Supportive School Environment for Transgender and Gender Nonconforming Students [pdf]
This Model Policy was developed by the Empire Justice Center, the Empire State Pride Agenda and the NYCLU, with contributions and/or support from the following organizations:

NYCLU Story Collection Project: School Climate, Gender identity & Expression in New York’s Public Schools Are you being discriminated against in school because you are transgender or gender nonconforming? Are you a parent or educator with questions? Do you have a story that you would just like to share with us? We want to hear from you! Email lfrederico@nyclu.org. How to make a complaint to your school If you’ve been subjected to bullying, discrimination or harassment.

RESOURCES FOR SCHOOLS
Transgender Students’ Rights and Schools’ Responsibilities [pdf]
A brief overview of gender identity and issues commonly faced by public schools with respect to: bathroom and locker room access for transgender students, the use of preferred name and gender pronouns and updating student records.

The New York State Dignity for All Students Act: A Resource and Promising Practices Guide for School Administrators and Faculty
The State Department of Education’s guide to assist schools in implementing the Dignity Act.