A Thanksgiving Poem in Support of All of New York's Families

The State Senate has agreed to vote on the same-sex marriage bill before the year is through. Let's make sure they keep their promise. Happy Thanksgiving from the NYCLU! 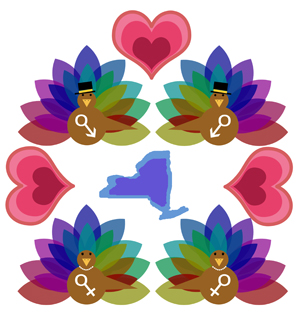 As New York's turkey families gather 'round tables this year, Some will be missing their holiday cheer. Yes, they'll be thankful for much, it's a fact, But the New York State Senate—it refuses to act To let turkey families of the same-sex feather Just sign a paper saying, "We gobble together."

So as you dig into your Thanksgiving plate, Send a quick little note to the reps of our state. Tell them, all turkey families deserve respect—yours and mine, And to vote yes on marriage in 2009.

By this time next year, we'll be thankful of The rights of all turkeys To marry the ones they love.

No Tax Credits for Donors to Private and Religious Schools

About 1,000 People Rally in Albany for Gay Marriage