Advancing Transgender Civil Rights and Equality in New York: The Need for GENDA

For some New Yorkers, the simplest and most fundamental parts of their identity – their clothing, their speech, even their names – expose them to hostility and exclusion. Transgender and gender non-conforming New Yorkers often experience persistent discrimination just because they do not look or act in a way that conforms to gender-based stereotypes or because their gender presentation or identity differs from the one usually associated with their anatomical sex. They face challenges earning a living, finding housing, and enjoying the simple pleasures and necessities of life. Everyday activities like eating out, shopping or going to the movies carry the risk of mistreatment, refusal of service – or worse.

Right now, no statewide law explicitly prohibits discrimination against transgender and gender non-conforming people. This means that people who are fired from their jobs, denied housing and services, and mistreated in the workplace, in stores and in restaurants because of their appearance or gender identity do not have clear legal protection. The Gender Expression Non-Discrimination Act (GENDA) will fix this problem, by adding gender identity and gender expression to the categories currently included in New York State's anti-discrimination laws, such as sex, sexual orientation, race, religion and disability. Sixteen states and the District of Columbia protect the civil rights of all their residents, including transgender and gender non-conforming people. New York doesn't – yet. That's why we're working hard to get GENDA on the statute books. The Assembly passed GENDA on April 30, but the bill faces a tougher test in the State Senate. Learn more and take action to help make GENDA the law in New York. 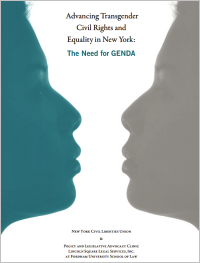 NY Jail Forced a Trans Woman Into a Men’s Facility