A federal lawsuit filed July 2 seeks justice for Kenneth Chamberlain, Sr., a 68-year-old Marine Corps veteran who was fatally shot in his home in November 2011 by an officer of the White Plains Police Department.
Listen to the recording:

%3Cembed%20src%3D%22http%3A%2F%2Fdevtwo.nyclu.org%2Ffiles%2Faudio_player_standard_black.swf%22%20quality%3D%22high%22%20allowscriptaccess%3D%22always%22%20wmode%3D%22transparent%22%20type%3D%22application%2Fx-shockwave-flash%22%20flashvars%3D%22valid_sample_rate%3Dtrue%26amp%3Bexternal_url%3Dhttp%3A%2F%2Fwww.nyclu.org%2Ffiles%2Flhv_chamberlain_pr_070512.mp3%22%20pluginspage%3D%22http%3A%2F%2Fwww.macromedia.com%2Fgo%2Fgetflashplayer%22%20width%3D%22240%22%20height%3D%2270%22%3E%3Cbr%20%2F%3EA%20portion%20of%20the%20recording%20of%20the%20fatal%20incident%20from%20Kenneth%20Chamberlain%27s%20Life%20Aid%20device.%20%20Officers%20can%20be%20heard%20to%20harass%20Chamberlain%20throughout%2C%20repeatedly%20banging%20on%20his%20door%20and%20using%20a%20racial%20slur%20at%20the%2030%20second%20mark%20of%20the%20clip.%3C%2Fembed%3E
Privacy statement. This embed will serve content from nyclu.org.
Police arrived at Chamberlain's door after the elderly man's medical alert device was accidentally triggered. The medical device recorded audio from the racially-charged stand-off – during which an officer can be heard using the N-word against Chamberlain. “The tragic killing of Mr. Chamberlain makes plain the pressing need for appropriate accountability and transparency for the White Plains Police Department and law enforcement agencies throughout Westchester County,” NYCLU Lower Hudson Valley Chapter Director Daniel E. Berger said. “Police misconduct, particularly when left unaddressed, erodes public trust in law enforcement, which makes people less willing to work with police to keep our communities safe. Legislative reform is urgently needed to establish meaningful civilian oversight of law enforcement, and to work toward a standard of best practices for police departments countywide. Accountability and transparency benefit everyone, including the vast majority of police officers, who are courageous public servants dedicated to keeping our communities safe.” 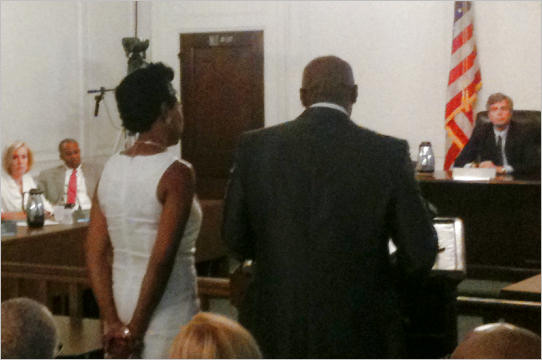 Kenneth Chamberlain, Jr., joined by Constance Macolm, the mother of Ramarley Graham, addresses the White Plains Common Council to ask for disciplinary action against officers involved in the incident.
The NYCLU, which is not involved in the litigation, is part of a coalition of civil rights groups working toward greater transparency and accountability for police departments in the region through increased civilian oversight. The lawsuit, filed by Chamberlain's son, names as defendants the City of White Plains, the officers involved in the incident and the White Plains Housing Authority, which, without tenants' consent or knowledge, allegedly provided police officers with master keys to the apartments at the public housing complex where Chamberlain lived. The U.S. Attorney for the Southern District of New York is investigating the shooting. The federal investigation was launched after a Westchester grand jury decided not to indict Anthony Carelli, the officer who shot Chamberlain to death. Officer Carelli will face charges in court later this month for a separate incident in which two Arab Americans claim the officer assaulted them and used racial slurs against them during a 2008 arrest. In addition to compensatory and punitive damages, the lawsuit seeks further relief as the court deems appropriate. The complaint draws particular attention to the absence of appropriate training and disciplinary procedures within the White Plains Police Department, specifically with regards to use of excessive force and discriminatory policing. 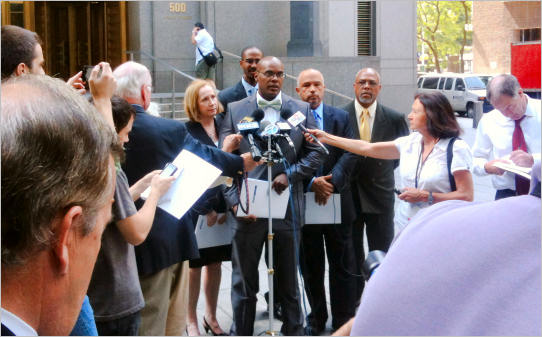 Kenneth Chamberlain, Jr. speaks to reporters at a press conference to announce the filing of a federal civil rights lawsuit in the death of his father.

NYCLU to Argue Before Second Circuit Friday in Challenge to Oyster...