Last November, New Yorkers sent a clear message to Albany: as the Trump administration ran roughshod over civil liberties, voters wanted a state legislature that would stand up for our constitutional rights. The NYCLU issued our report The First 100 Days: Albany’s Path to a Fairer New York, laying out a path to accomplish just that.

We’re just passing the 100-day mark of the state legislative session, so it’s a good time to take stock of our new representation in Albany. How have legislators fared in making New York a beacon of democracy, dignity, and equality during a time of national turmoil? In a nutshell: pretty darn well - the New York legislature has passed a full two thirds of our agenda.

There’s more hard work to do to make New York truly free and equal – but 2019 is off to a strong start. Here are the highlights:

With reproductive rights under threat, our lawmakers passed the Reproductive Health Act (RHA), removing abortion from the criminal code and clarifying that properly trained practitioners can offer early abortion care. Its passage finally ensures that New Yorkers who need care later in their pregnancies will not be forced to carry an unhealthy or non-viable pregnancy to term if they don’t have the means to travel out of state.

The same day, lawmakers passed the Comprehensive Contraception Coverage Act (CCCA). This law ensures timely and affordable access to contraception by requiring insurers to cover the contraception that is right for each patient, without a co-payment. Together, these laws mean that women can better plan their families and futures, strengthening the health and well-being of all New Yorkers and our communities.

Equal Justice Under the Law

The presumption of innocence until proven guilty is a cornerstone of our justice system. But each year, tens of thousands of accused New Yorkers sit behind bars, pulled away from work and family, simply because they can’t afford to buy their way out on bail. Slow and backlogged courts drag out injustice, and unfair evidence-sharing rules prevent defendants from effectively preparing and making informed decisions about their cases.

To remedy this, lawmakers enacted the Pre-Trial Justice Reform Act as part of the recent state budget which includes key reforms to our state’s bail, discovery and speedy trial laws.

The bail reform passed as part of the budget makes it less likely that race and wealth will influence a person's time spent in jail. The new legislation ends cash bail for most misdemeanors and non-violent felonies, which should mean that thousands of New Yorkers accused of crimes will not have to spend time in jail because they can’t pay bail.

Lawmakers also fixed the state's “discovery rule,” allowing New Yorkers to mount a stronger defense when accused of a crime. Before, prosecutors hid vital information from defendants until the day of trial. Now New York will have one of the fairest pre-trial discovery systems in the country that will require prosecutors to share their evidence with defendants soon after their arrest. This will give people the information they need to decide how and whether to fight their cases.

Lawmakers also passed legislation to require law enforcement agencies to collect and report information on the number of people who die in custody, an important step toward increased police transparency.

On the first day of session, New York lawmakers passed early voting, catching us up to the two-thirds of states that don’t require nearly every vote to be cast in person after waiting in a long line on Election Day. Lawmakers also set in motion an opportunity for voters to update our state constitution to allow any eligible New Yorker to vote absentee, and to register and vote on the same day. And in the budget, lawmakers and the Governor adopted and funded the electronic poll-book systems that will make early voting a reality statewide starting this November.

Fighting the Hate and Standing Up for Students

Legislators also passed legislation that will require school districts and school resource officers to develop a joint "Memorandum of Understanding" detailing the role that the police play in schools and making it clear that educators are responsible for school discipline.

These are very big victories that will improve the lives of countless New Yorkers. But there’s still plenty of vital work for lawmakers to do before their session ends in June.

As the NYCLU keeps advocating for our civil rights and liberties in Albany, here’s what remains at the top of our priority agenda:

Albany has heard New Yorkers’ voices, and lawmakers have made it a priority to strengthen the pillars of our democracy, fight for the dignity of all people, and push back against the harmful actions of the Trump administration. Our fight is far from finished. But the first few rounds suggest that the values of equality, dignity, and justice for all are winning this legislative session in New York. 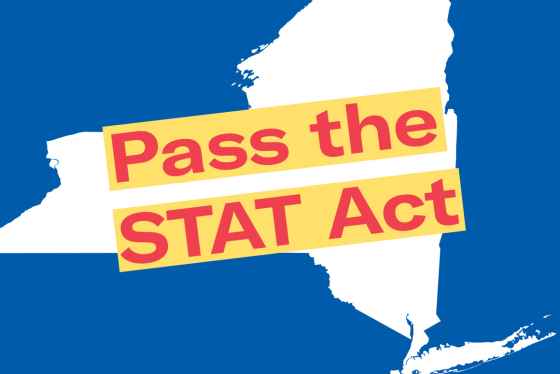