When Poverty Keeps People Behind Bars

By Philip Desgranges , Senior Staff Attorney, Legal
In the American justice system, the "poor and rich, weak and powerful alike" should be treated equally. But for far too many people living in poverty, that principle does not match their reality.
In two separate cases this week, the NYCLU is asking courts to rule that people should not be imprisoned simply because they are too poor to buy their freedom.
First, we’re challenging the detention of asylum-seekers at Batavia, an Immigration and Customs Enforcement (ICE) facility in upstate New York. We are asking a federal district court in Rochester to ensure that these asylum-seekers are not needlessly held in immigration detention for months or even years just because they can’t pay to get out.
Our clients are all people who fled persecution in their home countries and made long and dangerous journeys to the U.S where they presented themselves at the border and hoped to find refuge in this country. They are now waiting for their asylum cases to be heard in the backlogged immigration court system.
The federal judge overseeing this case ruled last November that asylum-seekers detained for six months or longer are entitled to have ICE’s decision to keep them locked up reviewed by an immigration judge. But since then, immigration judges reviewing these cases have set prohibitively high bonds—an average of $12,250. They’re setting bond without asking detainees about their financial circumstances and without considering conditions of release other than a cash bond. To make matters worse, under ICE’s current policy, an immigrant must pay the full value of the bond up front to be released. All of this means that many people remain exactly where they were before these hearings took place: in custody.

Despite Alsane’s economic circumstances, an immigration judge ordered that bond in his case be set at $12,000, an amount that for Alsane might as well be $12 million.

These are people like Alsane, who fled religious persecution in Senegal and who has hardly a penny to his name. He has been in ICE custody since September 2016—over fifteen months. Even though he has a job at the detention center, he makes just $1 a day. That’s hardly enough for him to buy basic necessities like shampoo and stamps.
Despite Alsane’s economic circumstances, an immigration judge ordered that bond in his case be set at $12,000, an amount that for Alsane might as well be $12 million. So, now he’s stuck at Batavia, even though the immigration judge just recognized there’s no need for him to be there.
It’s not just Trump’s deportation machine that keeps poor people locked up for no good reason. Right here in New York State, bail is one of the main drivers of mass incarceration. Across the state, thousands of poor pretrial defendants, who have not been convicted of any crime, sit in jail for weeks and months at a time waiting for their cases to be heard because they cannot afford to pay bail.
In the second case we filed this week, Kunkeli v. Anderson, we are challenging the routine incarceration of poor defendants in New York’s jails. They are supposed to be innocent until proven guilty, but they remain behind bars. 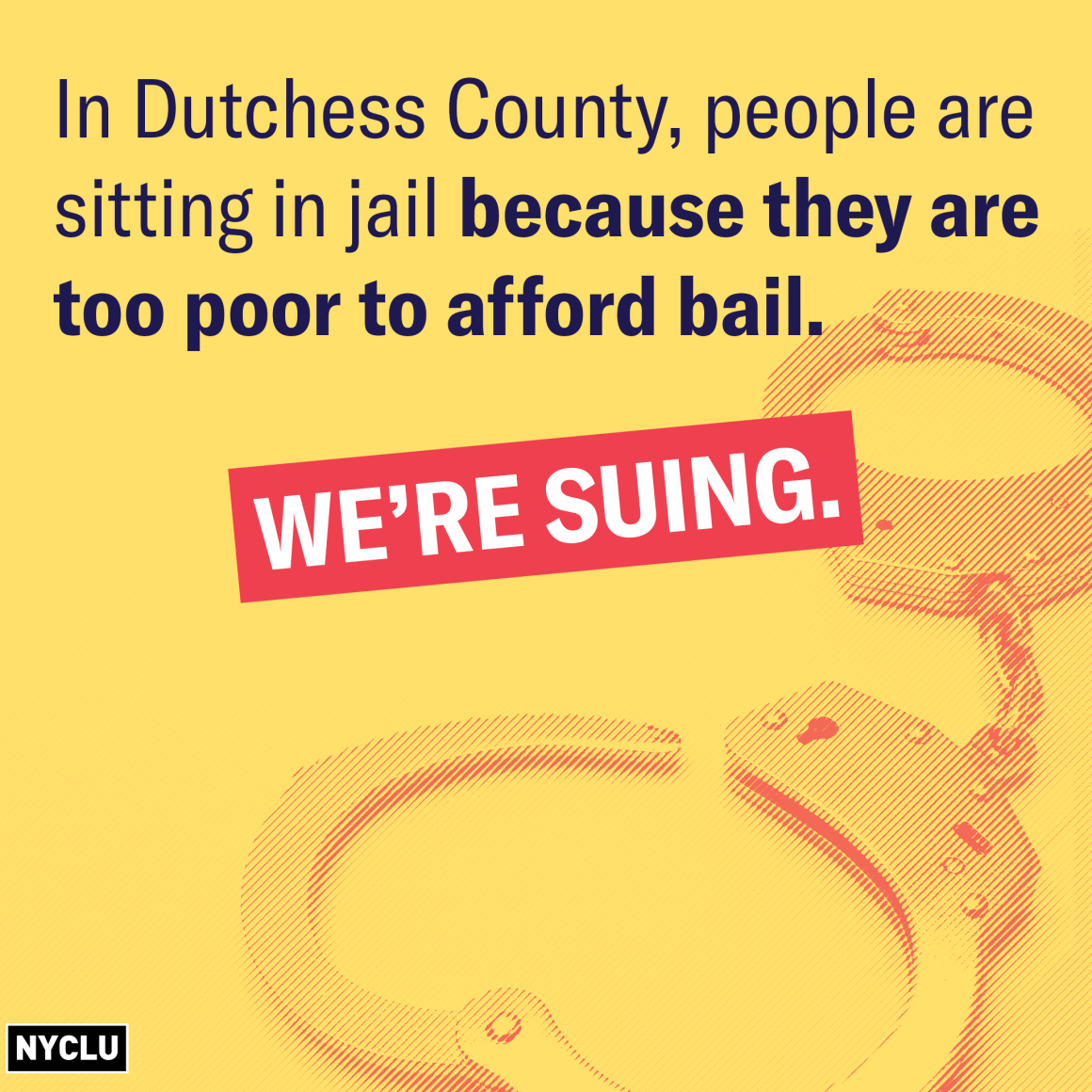 Our client, Christopher, was accused of shoplifting and confined in the Dutchess County Jail in Poughkeepsie because he could not afford to pay his $5,000 bail, which is nearly half the annual income he earns as a mechanic. He has been incarcerated for nearly three months, away from his family and friends. And all because bail was set without any consideration of his ability to pay or assessment of whether alternatives to bail, like supervised release, could have assured his return to court.
Christopher’s case is not unique. Most of the pretrial detainees confined in the Dutchess County Jail are there for minor offenses.
Both Alsane and Christopher know the reality is that our justice systems deliver freedom only to those rich enough to purchase it. Through these two cases, we hope to help change that.
Related Issues

Police Abuse is More Obvious than Ever. Here’s Why