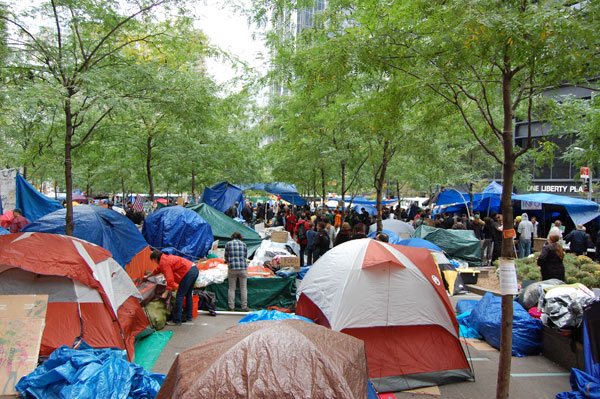 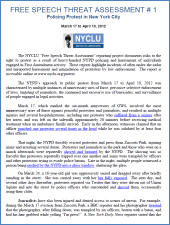 Download:
Part 1, Part 2, Part 3, Part 4
The NYCLU “Free Speech Threat Assessment” reporting project documents risks to the right to protest as a result of heavy-handed NYPD policing and harassment of individuals engaged in First Amendment activity. The NYCLU has been dedicated to monitoring and responding to the needs of Occupy Wall Street protesters since the movement's inception, as we have done in other mass protests, including the Republican National Convention protests in 2004. While many mainstream media accounts of policing protest activity have focused on incidents involving excessive use of force, these periodic “Free Speech Threat Assessment” reports highlight repeated incidents of often under-the-radar harassment and intimidation by law enforcement against protestors. These reports are meant to highlight the fact that under-the-radar harassment of protest activity by law enforcement is often more pervasive, and may present as great a deterrent impact on freedom of expression and assembly as occasional incidents of mass arrest or dramatic and well-publicized excessive force. This website will be updated with periodic reports that summarize policing activity in order to identify and analyze trends that may have a chilling effect on the constitutionally protected right to free speech and assembly. These reports consist of compilations of observations from legal observers, accounts from protesters and members of the public, news reports, and video. Each report summarizes recent trends in NYPD's policing of protest in the time period covered by the report, and highlights examples of NYPD's intimidating and harassing conduct toward First Amendment activity. It is our hope that these reports will both raise the general public's awareness of policing practices and motivate people, including policy makers, to advocate for reforms of law enforcement's response to protest activity. How to get involved: We welcome information from legal observers, the media, protesters and the general public, including documentation of incidents where possible. If you witness an instance of harassment or infringement of rights by the NYPD against protesters, please contact the NYCLU at protest@nyclu.org. If you are interested in becoming a legal observer, please contact kbromberg@nyclu.org to gain more information about being a NYCLU legal observer and any upcoming trainings.

INTERFERENCE WITH REPORTERS, CITIZEN JOURNALISTS AND LEGAL OBSERVERS Reporters, legal observers, and the general public all have a First Amendment right to observe, take pictures, and otherwise document police activity as long as they are not interfering with police and obeying all other laws. However, there have been numerous reports of police unjustly prohibiting both journalists and civilians from taking pictures and video footage. Some officers have even broken or confiscated cameras and deleted photos. While the NYPD is well aware of these rights, the Department has created a selective credentialing system that only permits a small minority of primarily mainstream journalists the ability to cross police lines and get closer to scenes of events than citizen journalists and members of the public. However, the police, on occasion, even infringe on the freedom of these credentialed members of the press, blocking their cameras, keeping them away from scenes of protest, and sometimes arresting and injuring them. The subjective suppression and violence that the NYPD employs against journalists of all stripes, as well as citizens, not only impedes the press from fulfilling their duties but intimidates others who wish to document police activity. BARRICADES AND IMPEDIMENTS TO MOVEMENT The First Amendment protects freedom of assembly as well as freedom of speech. However, barricades are frequently used to impede lawful protest activity in New York City. While some barricade uses, such as lining streets with barricades during a march, are not inherently problematic, barricades are also used to unreasonably prevent or hinder people from entering or exiting public spaces, such as parks or sidewalks. Even where barricades surrounding public spaces have clear and accessible openings, the effect of standing in such a restricted area causes some people to feel unease and deters some protesters from taking part in protest activity in such spaces. This is particularly true in spaces like Zuccotti Park, which, for two months, was barricaded except for two small openings where security guards were stationed to search the possessions of all persons attempting to enter. SELECTIVE ENFORCEMENT AND FALSE ARRESTS Protesters have a right to equal enforcement of the laws, which includes not being subjected to law enforcement merely because of the exercise of a protected right, as well as a Fourth Amendment right not to be arrested without cause. Protesters are routinely arrested and harassed due to the NYPD and Parks Department's selective enforcement of minor regulations, including a great many laws on the books that are never or rarely enforced in other circumstances. For example, protesters have been harassed and arrested for holding large banners, placing signs on the ground, walking in the street for a short period of time, sleeping on a sidewalk, using tables to distribute food and literature, drawing with chalk, speaking or playing instruments too loudly, being present in public parks normally open to the public after curfew, dancing, singing, wearing masks, having large bags, and using blankets. Oftentimes, those engaged in protest are not even aware that they are violating rules for behavior that was permissible just days prior. This creates a heightened state of stress for protesters wishing to be law abiding, who are merely confused by the seemingly ever-changing rules imposed by New York City law enforcement officers. The uncertainty and discomfort caused by heightened monitoring by law enforcement also discourages would-be protesters from assembling and exercising their First Amendment rights. SURVEILLANCE, RECORDING AND MONITORING OF PUBLIC PROTEST The constant NYPD surveillance of lawful protest raises serious concerns about the chilling effect on First Amendment activity, and about the NYPD's compliance with a longstanding court order that prohibits the NYPD from documenting and creating dossiers on people engaged in legal protest activity. There is heavy video surveillance of lawful protest by NYPD officers all over New York City, especially Manhattan. This includes both NYPD operated cameras and private cameras attached to businesses that are accessible to police. NYPD TARU (Technical Assistance Response Unit) officers carry video cameras and frequently videotape protesters doing nothing more than standing or walking on sidewalks, as well as other legal activities. In addition, police officers are regularly deployed, sometimes in great numbers, to the sites of peaceful protests where they visually monitor protest activities. Plainclothes police officers as well as undercover officers are also permitted to attend protests as well as public meetings without identifying themselves as police officers. The persistent videotaping of protesters, and the obvious police presence, is unnerving and sometimes even frightening to those who wish to engage in legal protest activity without feeling that their movements are being monitored and personal information compiled by law enforcement. UNNECESSARY USE OF FORCE AND OVERPOLICING Protesters have a right to be free from undue force under the First and Fourth Amendments. However, large scale protests in New York City are occasionally punctuated by unnecessary uses of force. Examples of unnecessary force used against non-violent protestors include: hitting protesters with batons, punching, pushing and shoving, ramming protesters with scooters, and violent arrests. Unnecessary force is often witnessed during times when police are attempting to disperse a crowd or force protesters to move in a certain direction. Regardless of whether protestors are seriously injured as a result of this use of police force (although they occasionally are), fear of injury can cause protesters to think twice before attending a demonstration or march, chilling First Amendment expression. Moreover, even where no force is used, the sheer number of police with scooters, batons, guns, and riot gear present at any given event can have an intimidating effect on those present and on those who are deterred by this show of force from participating at all in First Amendment activity.
Related Issues

To Reduce the Power of Police, We Must Protect Our Privacy