NEW YORK - Today the New York Civil Liberties published a topline analysis and the full datasets from the New York State Education Department’s (NYSED) statewide survey of school districts at the end of 2020. Containing self-reported data from each district, the data reflects some of the most comprehensive information available for remote learning access at the height of the pandemic at the state, district, and school level.

Obtained through a FOIL request, the survey revealed that at the end of the 2020-21 school year, more than 215,000 students (eight percent of those included in the survey) in New York lacked devices, and more than 165,000 students (six percent) lacked sufficient internet access. More than 2.6 million students were represented in the survey results. The data reveals that during the pandemic, a student in a majority Black or Brown school district was four times more likely to have inadequate or no internet than a student at a majority white school district, and three times more likely to not have a dedicated device.

“This information underscores just how vulnerable our public schools are after decades of under-funding and racial segregation,” said Johanna Miller, director of the Education Policy Center at the NYCLU. “Education leaders at every level need to examine this issue with their communities and construct solutions that will heal, restore, and compensate for the failure to reach so many kids during the pandemic. The pool of resources to support schools in the budget is finally deep enough to support this. We hope NYSED will help target relief to areas where existing inequities were exacerbated by social isolation, emotional devastation, and loss of instruction.”

During the course of the pandemic NYSED conducted a survey of districts statewide to learn about the results of remote learning. In December they finalized the survey results and the NYCLU submitted a FOIL request for the data. The data reflects self-reported numbers from school administrators across the state.

“Districts across the state bent over backwards to provide instruction and connection to students this year, but unfortunately inequities in resources proved insurmountable in some areas,” said Irma Solis, the Suffolk County Chapter Director for the NYCLU. "For all the difficulties of remote learning, it has the potential to increase access and facilitate greater connection for students when paired with in-person instruction, but we can't serve our children better if we don't reimagine how learning happens in our districts. Our students who have historically gone without support and access were the ones doubly burdened by a remote learning education. New York leaders need to take a hard look at this information and use it to help bridge the digital divide and allow our students to get more connected. That means assessing student needs and making sure state funding is dedicated to providing tutoring services, supplemental learning, and social and emotional programming."

Results across the state varied widely, reflecting the non-uniformity of the state’s intervention to support remote learning. In many areas, existing inequities and challenges were reflected in the data. In some areas, district approaches proved that providing equitable remote learning access was possible under the circumstances of the pandemic.

Other noteworthy findings include: 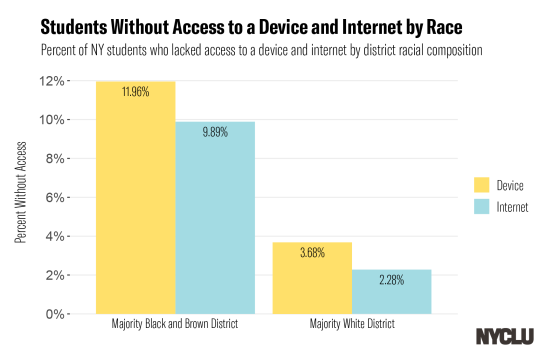 “The state of New York has a legal obligation to provide all students access to a sound basic education,” said Miller. “The incredibly tiny budget margins in most school districts, especially urban districts, meant most places could not provide adequate instruction quickly or effectively during the pandemic. And the state failed to step in to close those gaps, choosing instead to cut dollars from districts that received pandemic aid. Looking ahead, the state must require and support districts to implement plans that are responsive to students’ needs, with a particular focus on advancing racial equity.”

In October 2020 the NYCLU sent a letter to NYSED Commissioner Betty Rosa addressing the ongoing issues with remote learning. The letter highlighted reports statewide of missing devices, language barriers, discontinuity of services for students with disabilities, and students without internet who were provided with only paper packets for months.

To access the raw data and view information at the school and district level, please visit the NYCLU’s GitHub page.