In a settlement announced today with the New York Civil Liberties Union and other civil rights advocates, New York City has agreed to pay nearly $18 million for the arrest, detention and fingerprinting of hundreds of protesters, journalists, legal observers and bystanders during the 2004 Republican National Convention – the largest protest settlement in history. The NYCLU filed the first cases following the Convention and has been central to the legal challenge to the NYPD’s actions. “No lawful protester should ever be treated like a criminal in New York City, or anywhere else in the United States,” said NYCLU Executive Director Donna Lieberman. “This historic settlement must serve as a reminder to New York City and government across the country that the right to protest is a fundamental pillar of a fair and functioning democracy. And it is the role of government and law enforcement to not only tolerate protest, but protect and defend it.” The 2004 RNC prompted hundreds of thousands of people to participate in lawful demonstrations in New York City. Despite the peaceful nature of the gatherings and the First Amendment’s guarantee of the right to protest, the NYPD engaged in mass arrests, including of more than 1,800 protesters, bystanders, legal observers and journalists. The Department then fingerprinted everyone and held hundreds for more than 24 hours at a filthy, toxic pier that had been a bus depot. In early October 2004, the NYCLU filed the first two Convention lawsuits. One (Schiller v. City of New York) arose out of the mass arrest of 226 people on a sidewalk on Fulton Street near the World Trade Center and the other (Dinler v. City of New York) out of the mass arrest of nearly 400 people on East 16th Street near Union Square. Both challenged the mass arrest, lengthy detention and blanket fingerprinting of protesters, journalists and bystanders at each location. Following many years of litigation, the federal District Court in October 2012 ruled that the Fulton Street mass arrest was unconstitutional and rejected the city’s claim that the 16th Street mass arrest was permissible. In that ruling, federal Judge Richard Sullivan urged the city and the plaintiffs in the dozens of remaining Convention cases to settle, leading to today's settlement. And as condition of settling the two NYCLU cases, the city has agreed to abandon all the appeals it had filed of the October 2012 ruling. “The mass arrest, blanket fingerprinting and prolonged detention of demonstrators, bystanders and journalists at the Convention is one of the darkest chapters in New York City’s long and proud history of protest,” said NYCLU Associate Legal Director Christopher Dunn, lead counsel in the NYCLU cases. “While no amount of money can undo the damage inflicted by the NYPD’s actions during the Convention, we hope and expect that this enormous settlement will help assure that what happened in 2004 will not happen again.” 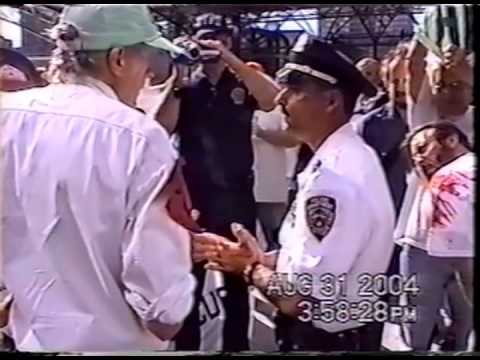 %3Ciframe%20width%3D%22500%22%20height%3D%22315%22%20src%3D%22%2F%2Fwww.youtube-nocookie.com%2Fembed%2Feke2dlkAL4w%3Fautoplay%3D1%26version%3D3%26playsinline%3D1%22%20frameborder%3D%220%22%20allowfullscreen%3D%22%22%20allow%3D%22autoplay%22%3E%3C%2Fiframe%3E
Privacy statement. This embed will serve content from youtube-nocookie.com.
Please note that by playing this clip You Tube and Google will place a long-term cookie on your computer. Please see You Tube’s privacy statement on their website and Google’s privacy statement on theirs to learn more. To view the NYCLU’s privacy statement, click here.
In the Fulton Street case, plaintiffs included Michael Schiller, Francesca Fiorentini and Robert and Neal Curley, held for at least 13, 17 and 16 hours, respectively, at the makeshift NYPD site at Pier 57. Schiller, a documentarian working for HBO, was surrounded by police netting and arrested while attempting to film protesters from the sidewalk. Fiorentini, an NYU undergrad, was photographing the War Resisters League demonstration when she was surrounded, arrested, handcuffed and made to sit on the street for two hours before being transported to Pier 57. Philadelphia lawyer Robert Curley and his 17-year old son, Neal, planned to join the War Resisters League protest but were among those arrested on the Fulton Street sidewalk. In the East 16th Street case, plaintiffs included Hacer Dinler and Ann Maurer. Dinler was a fitness and dance instructor from Brooklyn who was confined by police en route to dance class; she was not involved in the protest. After about two hours in confinement, despite repeated pleas for help, Dinler fainted and experienced convulsions. She was transported by ambulance to St. Vincent's Hospital, where she remained overnight for testing and treatment. Maurer, of Astoria, and several friends participated in the Union Square demonstration but deliberately sought to avoid conflict with the police by walking apart from the main group. NYPD officers forced Maurer, a legal assistant at the ACLU, and her friends onto 16th Street, where she was arrested, handcuffed and fingerprinted. Maurer spent almost a day in police custody before being released. In addition to Dunn, other NYCLU attorneys who worked on the Convention cases are Arthur Eisenberg, Taylor Pendergrass, Daniel Mullkoff, Scarlet Kim and Palyn Hung.
Related Issues