The New York for All Act

All New Yorkers, regardless of immigration status, want to lead open lives, participate in their communities, provide for their family, and access health care without intimidation. The New York for All Act offers protections that help make this possible, by prohibiting all local law enforcement and state agencies from conspiring with Immigration and Customs Enforcement (ICE) and Customs and Border Patrol (CBP), or participating in its cruelty.

For years, some of our leaders have used ICE to divide us, determined to cruelly target, demonize, and demoralize immigrants and separate families. ICE’s raids and scare tactics have cruelly separated families, and ICE has leaned on local law enforcement and government agencies to aid their arrests, deportations, and family separation. 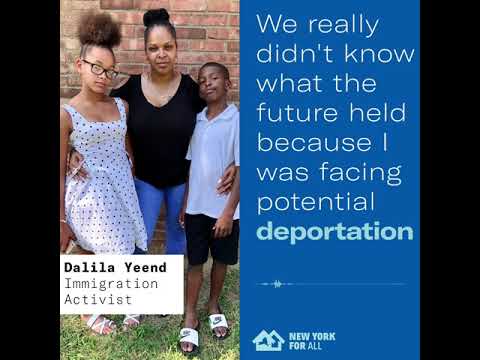 Because of this, many immigrant New Yorkers and their families live with the anxiety that living daily life in the open and interacting with government – whether in a police traffic stop, attending school, or visiting a public hospital for care – could lead to being torn away from family. This fear is especially damaging during the COVID-19 pandemic, pushing key communities away from the help they need to protect themselves and neighbor New Yorkers.

When local agencies work with ICE, it leads not only to unconstitutional racial profiling, but also to the misuse of our local tax dollars and resources to serve the agenda of those who want to stoke fear and divide us.

Scapegoating and targeting immigrant communities for arrests and deportation is both wrong and costly. We need our leaders to focus on creating a path to citizenship, not enabling ICE cruelty.

Where Washington has failed to take action, Albany can take the lead in keeping New York out of ICE’s cruelty and keeping all New Yorkers safe.

The New York for All Act (S.03076/A.02328) helps immigrant New Yorkers lead freer lives and take care of family, preserves state and local resources for our communities, and ensures New York dollars cannot be diverted to carry out a cruel, politicized immigration agenda.

The New York for All Act (S.03076/A.02328) broadly prohibits state and local officers from enforcing federal immigration laws, funneling people into ICE custody, and sharing sensitive information with federal immigration authorities. It prohibits ICE and CBP from entering non-public areas of state and local property without a judicial warrant. It also ensures that people in custody are given notice of their rights before being interviewed by ICE, and starts the process of limiting ICE and CBP access to state information databases.

WHY WE NEED NEW YORK FOR ALL